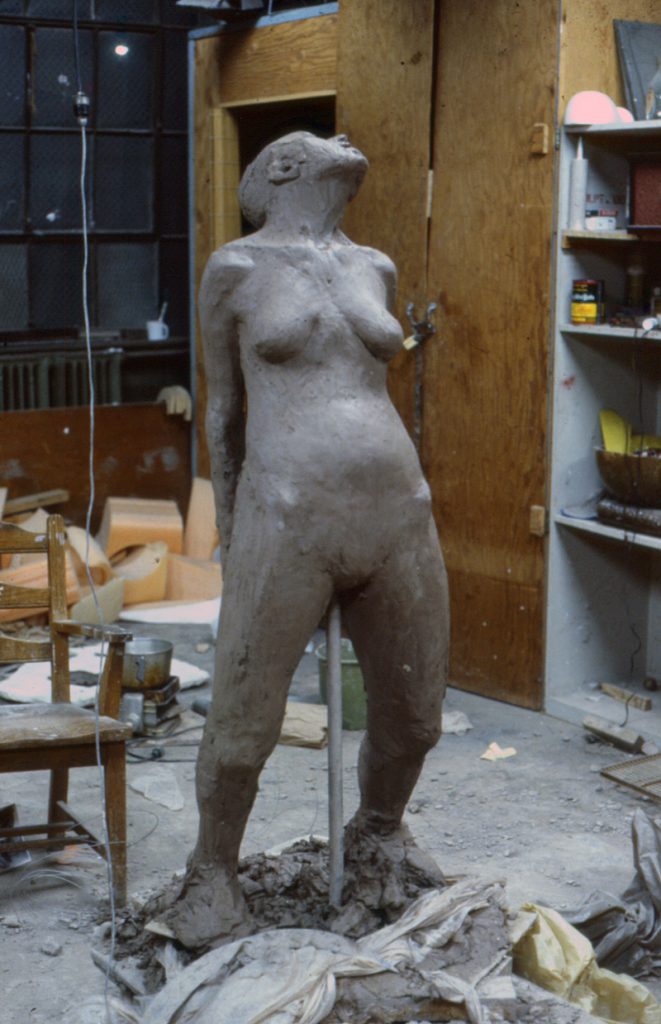 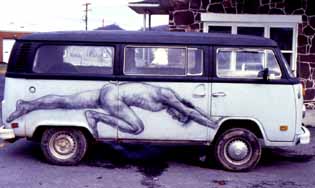 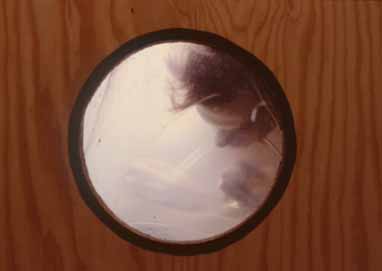 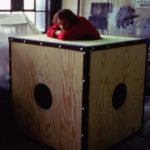 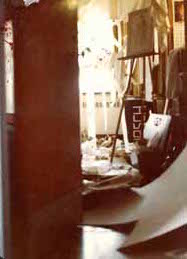 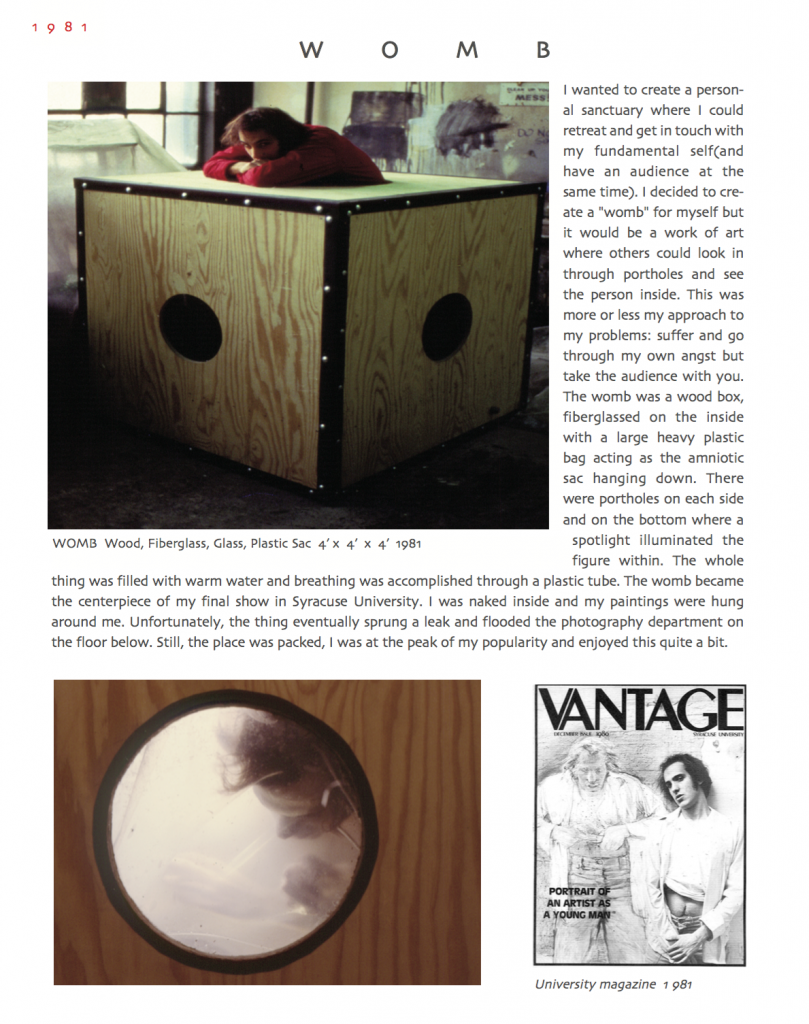 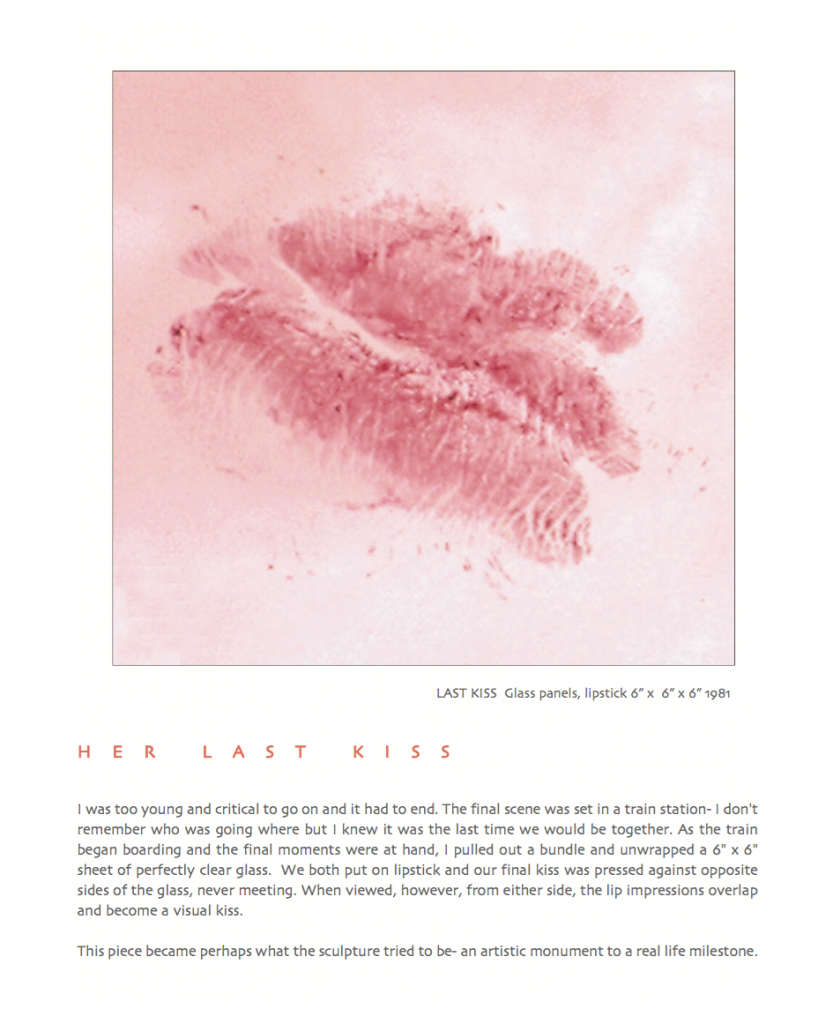 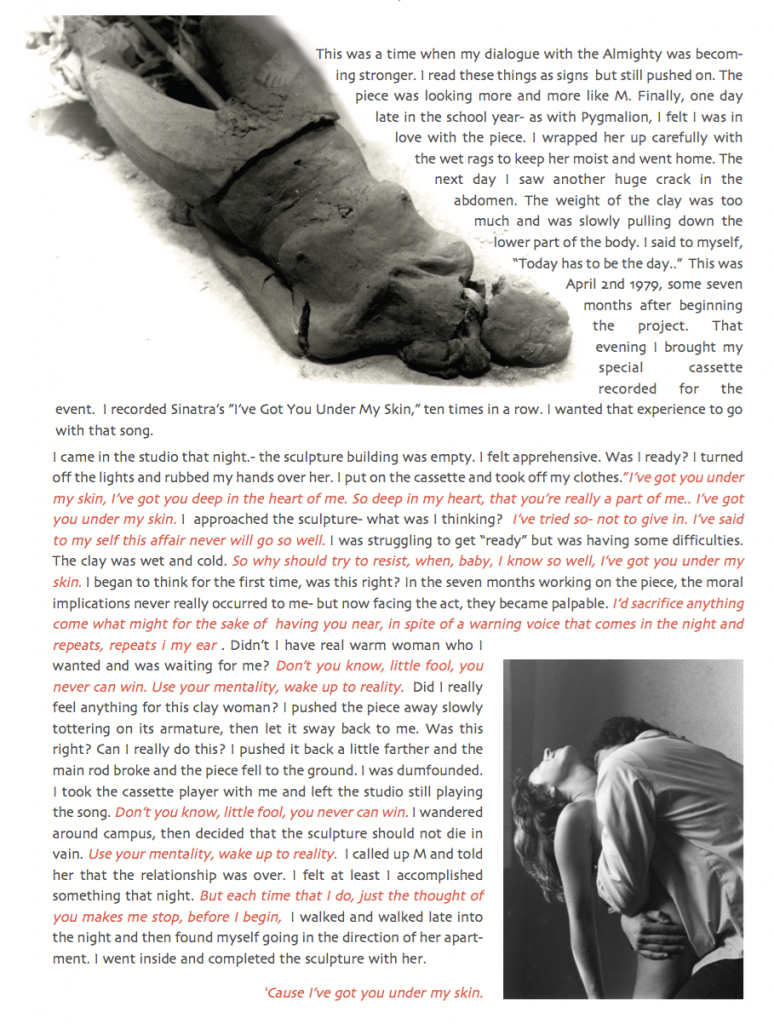 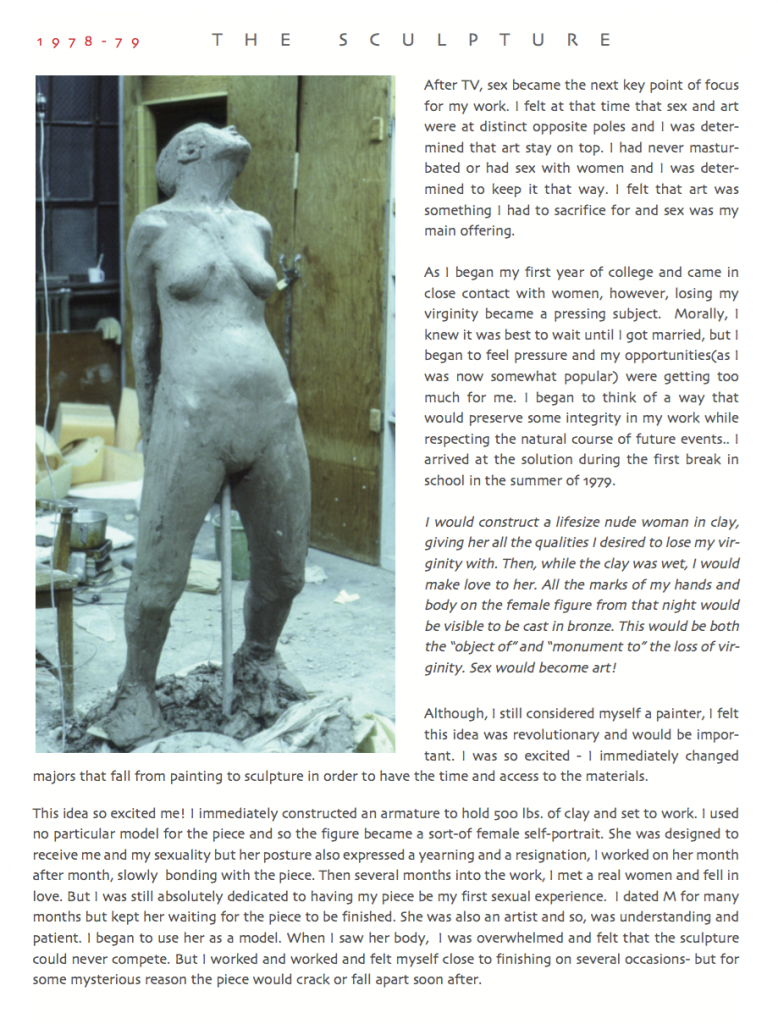 As I began my first year of college and came in close contact with women, however, losing my virginity became a pressing subject. Morally, I knew it was best to wait until I got married, but I began to feel pressure and my opportunities(as I was now somewhat popular) were getting too much for me. I began to think of a way that would preserve some integrity in my work while respecting the natural course of future events.. I arrived at the solution during the first break in school in the summer of 1979.

I would construct a lifesize nude woman in clay, giving her all the qualities I desired to lose my virginity with. Then, while the clay was wet, I would make love to her. All the marks of my hands and body on the female figure from that night would be visible to be cast in bronze. This would be both the “object of” and “monument to” the loss of vir– ginity. Sex would become art!

Although, I still considered myself a painter, I felt this idea was revolutionary and would be important. I was so excited – I immediately changed majors that fall from painting to sculpture in order to have the time and access to the materials.

This idea so excited me! I immediately constructed an armature to hold 500 lbs. of clay and set to work. I used no particular model for the piece and so the figure became a sort–of female self–portrait. She was designed to receive me and my sexuality but her posture also expressed a yearning and a resignation, I worked on her month after month, slowly bonding with the piece. Then several months into the work, I met a real women and fell in love. But I was still absolutely dedicated to having my piece be my first sexual experience. I dated M for many months but kept her waiting for the piece to be finished. She was also an artist and so, was understanding and patient. I began to use her as a model. When I saw her body, I was overwhelmed and felt that the sculpture could never compete. But I worked and worked and felt myself close to finishing on several occasions– but for some mysterious reason the piece would crack or fall apart soon after.

This was a time when my dialogue with the Almighty was becoming stronger. I read these things as signs but still pushed on. The piece was looking more and more like M. Finally, one day late in the school year– as with Pygmalion, I felt I was in love with the piece. I wrapped her up carefully with the wet rags to keep her moist and went home. The next day I saw another huge crack in the abdomen. The weight of the clay was too much and was slowly pulling down the lower part of the body. I said to myself, “Today has to be the day..” This was April 2nd 1979, some seven months after beginning the project. That evening I brought my special cassette recorded for the event. I recorded Sinatra’s ”I’ve Got You Under My Skin,” ten times in a row. I wanted that experience to go with that song.

I came in the studio that night.- the sculpture building was empty. I felt apprehensive. Was I ready? I turned off the lights and rubbed my hands over her. I put on the cassette and took off my clothes.I’ve got you under my skin, I’ve got you deep in the heart of me. So deep in my heart, that you’re really a part of me.. I’ve got you under my skin. I approached the sculpture– what was I thinking? I’ve tried so– not to give in. I’ve said to my self this affair never will go so well. I was struggling to get “ready” but was having some difficulties. The clay was wet and cold. So why should try to resist, when, baby, I know so well, I’ve got you under my skin. I began to think for the first time, was this right? In the seven months working on the piece, the moral implications never really occurred to me– but now facing the act, they became palpable. I’d sacrifice anything come what might for the sake of having you near, in spite of a warning voice that comes in the night and repeats, repeats i my ear . Didn’t I have real warm woman who I wanted and was waiting for me? Don’t you know, little fool, you never can win. Use your mentality, wake up to reality. Did I really feel anything for this clay woman? I pushed the piece away slowly tottering on its armature, then let it sway back to me. Was this right? Can I really do this? I pushed it back a little farther and the main rod broke and the piece fell to the ground. I was dumfounded. I took the cassette player with me and left the studio still playing the song. Don’t you know, little fool, you never can win. I wandered around campus, then decided that the sculpture should not die in vain. Use your mentality, wake up to reality. I called up M and told her that the relationship was over. I felt at least I accomplished something that night. But each time that I do, just the thought of you makes me stop, before I begin, I walked and walked late into the night and then found myself going in the direction of her apart ment. I went inside and completed the sculpture with her.

‘Cause I’ve got you under my skin.